Enlightn - Your performance & security consultant, an artisan command away.

A Laravel Tool To Boost Your App's Performance & Security 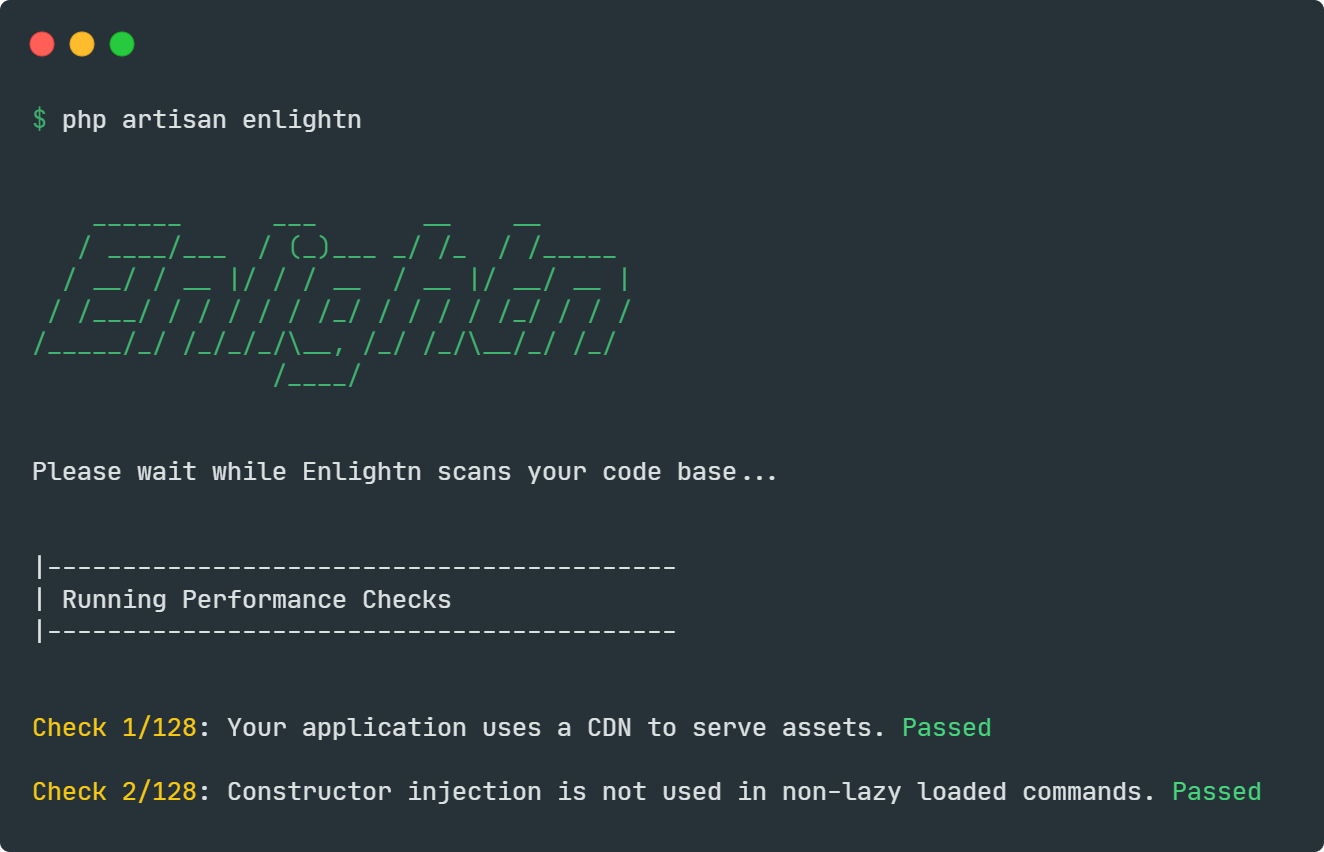 Think of Enlightn as your performance and security consultant. Enlightn will "review" your code and server configurations, and give you actionable recommendations on improving performance, security and reliability!

Enlightn Pro (commercial) is available for purchase on the Enlightn website and has an additional 64 automated checks (total of 128 checks).

Each of the 128 checks available are well documented. You can find the complete 137 page documentation here.

You may install Enlightn into your project using the Composer package manager:

After installing Enlightn, you may publish its assets using the vendor:publish Artisan command:

Note: If you need to install Enlightn Pro, visit the documentation on the Enlightn website here.

If you wish to run specific analyzer classes, you may specify them as optional arguments:

Note that the class names should be fully qualified and escaped with double slashes as above.

Recommended to Run In Production

If you want to get the full Enlightn experience, it is recommended that you at least run Enlightn once in production. This is because several of Enlightn's checks are environment specific. So they may only be triggered when your app environment is production.

In case you don't want to run on production, you can simulate a production environment by setting your APP_ENV to production, setting up services and config as close to production as possible and running your production deployment script locally. Then run the Enlightn Artisan command.

By default, the enlightn Artisan command highlights the file paths, associated line numbers and a message for each failed check. If you wish to display detailed error messages for each line, you may use the --details option:

If you wish to integrate Enlightn with your CI, you can simply trigger the --ci option when running Enlightn in your CI/CD tool:

Enlightn pre-configures which analyzers can be run in CI mode for you. So, the above command excludes analyzers that need a full setup to run (e.g. analyzers using dynamic analysis).

For more information on CI integration, refer the Enlightn documentation.

Sometimes, especially in CI environments, you may want to declare the currently reported list of errors as the "baseline". This means that the current errors will not be reported in subsequent runs and only new errors will be flagged.

To generate the baseline automatically, you may run the enlightn:baseline Artisan command:

If you wish to run this command in CI mode, you can use the --ci option:

For more information on establishing a baseline, refer the docs.

Enlightn offers a Github bot that can prepare a report highlighting failed checks and also add review comments for pull requests on the lines of code that introduce new issues. 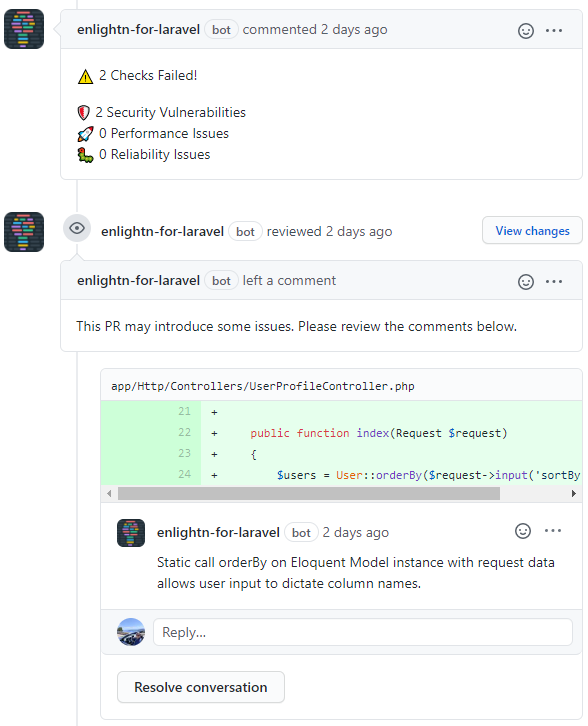 To integrate with the Enlightn Github bot, refer the docs.

All checks that fail will include a description of why they failed along with the associated lines of code (if applicable) and a link to the documentation for the specific check.

Finally, after all the checks have run, the enlightn Artisan command will output a report card, which contains information on how many and what percentage of checks passed, failed or were skipped.

The checks reported under the "Error" row indicate the analyzers that failed with exceptions during the analysis. Normally, this should not happen but if it does, the associated error message will be displayed and may have something to do with your application.

How Frequently Should I Run Enlightn?

A good practice would be to run Enlightn every time you are deploying code or pushing a new release. It is recommended to integrate Enlightn with your CI/CD tool so that it is triggered for every push or new release.

Besides the automated CI checks, you might also want to run Enlightn on a regular frequency such as every week. This will allow you to monitor the dynamic analysis checks, which are typically excluded from CI tests.

Only MacOS and Linux systems are supported for Enlightn. Windows is currently not supported.

Thank you for considering contributing to Enlightn! The contribution guide can be found here.

Our support policy can be found in the Enlightn documentation.

The Enlightn OSS (on this Github repo) is licensed under the LGPL v3 (or later) license.