This installer will setup a skeleton application based on mezzio by choosing optional packages based on user input as demonstrated in the following screenshot: 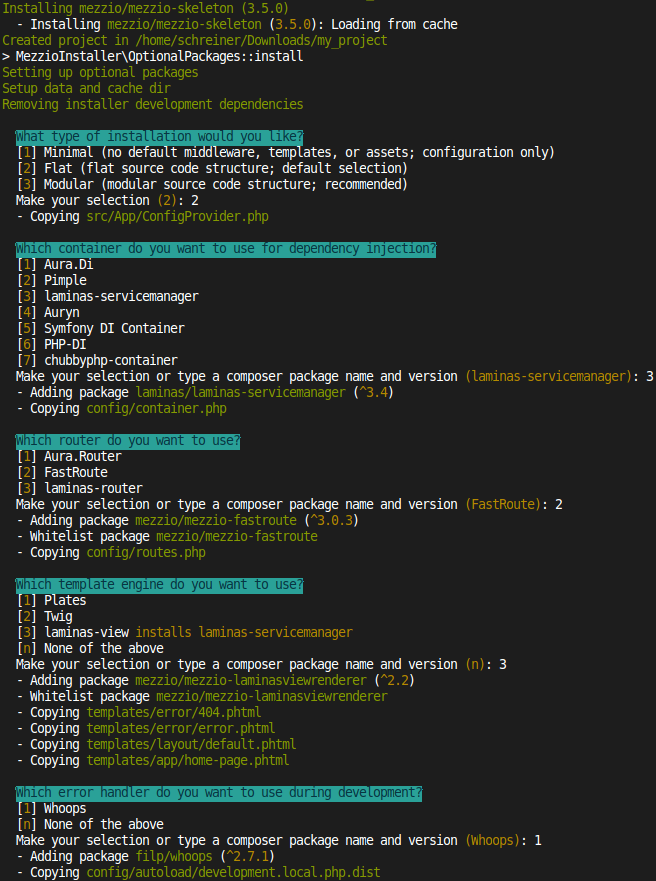 The user selected packages are saved into composer.json so that everyone else working on the project have the same packages installed. Configuration files and templates are prepared for first use. The installer command is removed from composer.json after setup succeeded, and all installer related files are removed.

After choosing and installing the packages you want, go to the <project-path> and start PHP's built-in web server to verify installation:

On PHP versions prior to 7.1.14 and 7.2.2, this command might not work as expected due to a bug in PHP that only affects linux environments. In such scenarios, you will need to start the built-in web server yourself, using the following command:

Composer commands time out after 300 seconds (5 minutes). On Linux-based systems, the php -S command that composer serve spawns continues running as a background process, but on other systems halts when the timeout occurs.

As such, we recommend running the serve script using a timeout. This can be done by using composer run to execute the serve script, with a --timeout option. When set to 0, as in the previous example, no timeout will be used, and it will run until you cancel the process (usually via Ctrl-C). Alternately, you can specify a finite timeout; as an example, the following will extend the timeout to a full day:

There is a feature to install alternative packages: Instead of entering one of the selection you can actually type the package name and version.

That feature allows you to install any alternative package you want. It has its limitations though:

If the installer fails during the composer create-project phase, please go through the following list before opening a new issue. Most issues we have seen so far can be solved by self-update and clear-cache.

If neither of the above help, you might face more serious issues:

This skeleton comes with laminas-development-mode. It provides a composer script to allow you to enable and disable development mode.

Note: Do NOT run development mode on your production server!

Note: Enabling development mode will also clear your configuration cache, to allow safely updating dependencies and ensuring any new configuration is picked up by your application.

You may need to clear the configuration cache in production when deploying if you deploy to the same directory. You may do so using the following:

You may also change the location of the configuration cache itself by editing the config/config.php file and changing the config_cache_path entry of the local $cacheConfig variable.

This section applies only if you cloned this repo with git clone, not when you installed mezzio with composer create-project ....

If you want to run tests against the installer, you need to clone this repo and setup all dependencies with composer. Make sure you prevent composer running scripts with --no-scripts, otherwise it will remove the installer and all tests.

Please note that the installer tests remove installed config files and templates before and after running the tests.