A Robo CLI tool for integrating with Acquia CloudAPI

The Acquia Cli tool provides developers, sysops, release managers and website administrators with a simple to use tool for obtaining information and running tasks on the Acquia Cloud.

Acquia Cli is simple to install and aligns to the permissions constructs already built into Acquia. The tool can be used for any task that can be completed using the Acquia web interface, and contains in-built instructions for each task.

If Acquia Cli doesn't have the task built in, simply create a ticket or a pull request for it to be included.

Downloading a version of the application

Select either the packaged application or the source application below before continuing with setup steps.

To install the packaged application quickly and easily, the following three steps may be executed.

If the packaged application is used, it can be updated simply and easily whenever a new release is out by running the following command from anywhere on the computer:

To install from source, clone the repository into a location on your computer with the following commands:

Choose one of the following methods to finish setting up your AcquiaCli installation.

Once you have downloaded the application using one of the above steps, run the following commands to enter add your Acquia credentials.

Alternatively, follow the below steps for a manual installation.

Environmment variables can be used to store and provide the API key and secret, removing the need for configuration files. Refer to the values in default.acquiacli.yml for examples of how to configure these environment variables.

If environment variables are to be used, these will need to be placed in the relevant bash file on Linux/Mac e.g. $HOME/.bashrc or $HOME/.bash_profile in the following format.

Windows users will need to add the environment variables within their system settings.

The Acquia Cli tool uses cascading configuration on the user's own machine to allow both global and per project credentials and overrides as needed.

Acquia Cli will load configuration in the following order with each step overriding matching array keys in the step prior:

The global and per project files may be deleted (manually) and recreated with acquiacli setup whenever a user wishes to do so.

Options may be manually set within the relevant acquiacli.yml file to change the following parameters under the extraconfig key:

Some of the following commands have aliases for simplicity e.g. environment:info has the alias of e:i.

See it in action 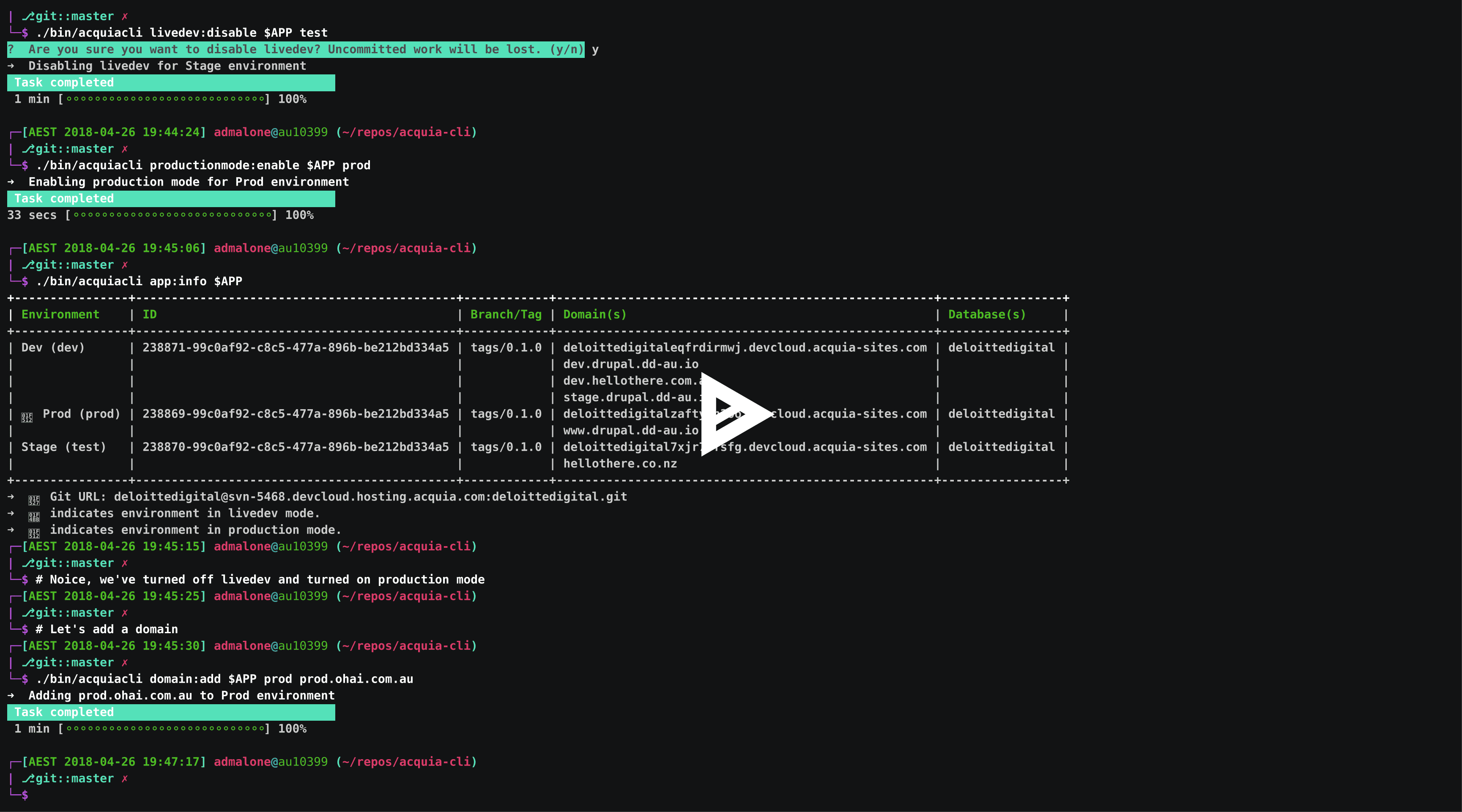 If a command takes an application UUID as a parameter, it can be provided in one of three ways - see below for a description of hosting realm:

Acquia uses the concept of a 'realm' to differentiate between customers on the two tiers of hosting offered:

If no hosting realm is provided, prod is used by default. This can be overridden in the command by specifying a realm e.g. --realm=devcloud

Both the UUID and the hosting ID (with realm) for your applications may be discovered by running acquiacli application:list

All other parameters are currently provided in the UUID form, including but not limited to:

Commands using the following parameters will be automatically converted by the Acquia Cli tool using the SDK. This is achieved in the validateUuidHook method in the AcquiaCommand class using a @hook validate annotation.

The Phar file has been tested minimally on Windows. It may be executed using PHP from a tool such as Chocolatey. You may run into cURL issues with SSL in some instances. The recommended approach to remediating SSL issues is to follow the basic instructions here. You may need to use alternate paths based on your PHP installation.