Tool to automatically elect the Coder of the Month based on the Git commits within your team.

It started as a fun-project - and still is: One day we discussed at internezzo how we can give away an award to our employees for e.g. "the committer of the month" (hence the name "CoMo").

CoMo fetches the meta data of commits from Git repositories, stores them in the database, aggregates them and renders some stats per person (this part and some trending stuff will be added soon). 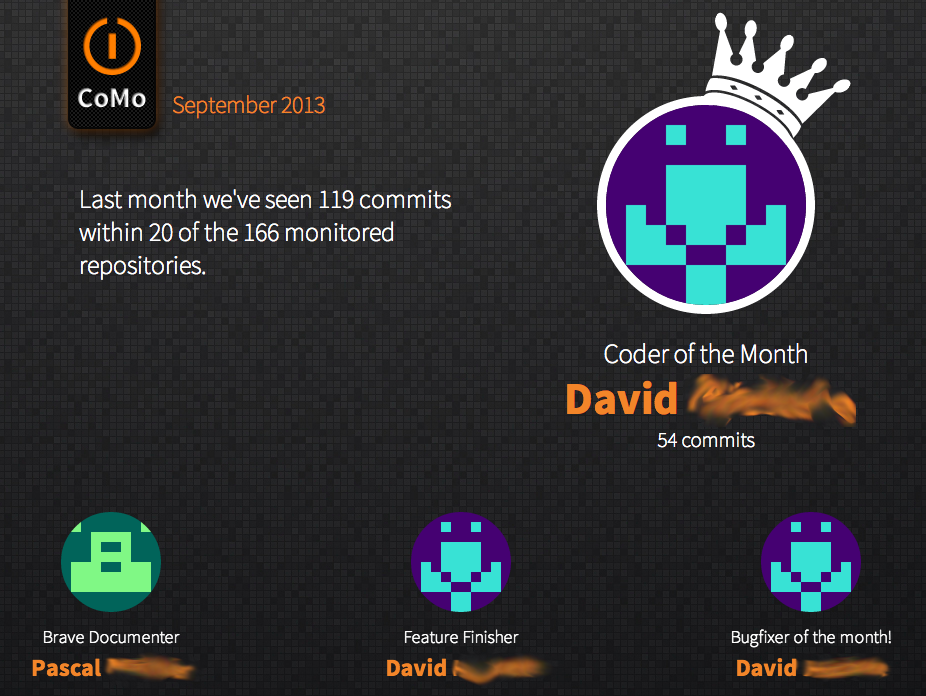 The stats can be integrated in a radiator screen within one's office to publicly promote the most active employee. To show different tool's output and "flip" through those pages one after each other, we've additionally built a small wrapper called "radiate"

But it goes even further: There's a command controller that can be run e.g. once a day to fetch a list of all repositories from a remote server via the Gitweb frontend. This eases it a lot for us as newly added repositories will be detected automatically by CoMo.

Regarding the repositories: Remote repositories will be cloned the first time, then just the changes will be pulled down to the local clone to save bandwith and processing time. For repos that are located locally (URL begins with file://), no clone is made, their log get's directly read from the original repo location.

Does it make sense?

Well, basically one can create a ton of smallish commits and he'll be the winner every month. That's true and of course a fact. CoMo is really more about the fun. But if you and your team is running via a code-review system (e.g. Gerrit) before committing to your master branch, the number of "merged-to-master"-changes get's more relevant of course (and you'll directly see those black sheeps that try to cheat with small commits)

To get the system up and running, of course you need to have a TYPO3 Flow setup and install this package into it (it's on packagist as mrimann/como. Then you need to execute the following commands on the commandline - or even better run them via crontab to let the system do the work on it's own:

A list of repositories to monitor is kept in the database. If you run a server that hosts your Git repositories and have a Gitweb-Frontend installed, CoMo can actually get a list of all repos e.g. once daily and automatically add new repositories that have been created so they get monitored, too.

This will show you all the options on how to use this command.

Electing the Coder of the Month

Based on the now processed (aggregated) data, CoMo can now elect the Coder of the Month if you execute the following command:

This will elect the coder of the month for the last calendar month (since the current month is not over yet, it can't be elected yet).

Feel free to file new issues if you find a problem or to propose a new feature. If you want to contribute your time and submit a code change, I'm very eager to look at your pull request!

In case you want to discuss a new feature with me, just send me an e-mail.

Want to make me happy?

Here's a list of things to make me happy and that will keep me doing stuff like this in the future :-)

Licensed under the permissive MIT license - have fun with it!