This package contains a tool that can parse TYPO3's configuration language, "TypoScript", into an syntax tree and perform static code analysis on the parsed code. typoscript-lint can generate Checkstyle-compatible output and can be used in Continuous Integration environments.

This project started of as a private programming excercise. I was writing an article for the T3N magazine on Continuous Integration for TYPO3 projects, introducing tools like JSHint or CSSLint, and I noticed that no comparable tools exist for TypoScript. So I thought, "What the heck, let's go" and at some point realized that my little programming excercise might actually be useful to someone. So, that's that. Enjoy.

Of course, this works best if your TYPO3 project is also Composer-based. If it isn't, you can also install the Linter globally using the composer global command:

Alternatively, you can also install typo3-typoscript-lint with Phive:

In this case, it will be installed into the ./tools folder of your current directory:

By default, it will print a report on the console. To generate a checkstyle-format XML file, call as follows:

To generate a report formatted according to the GNU Coding Standards, call as follows: 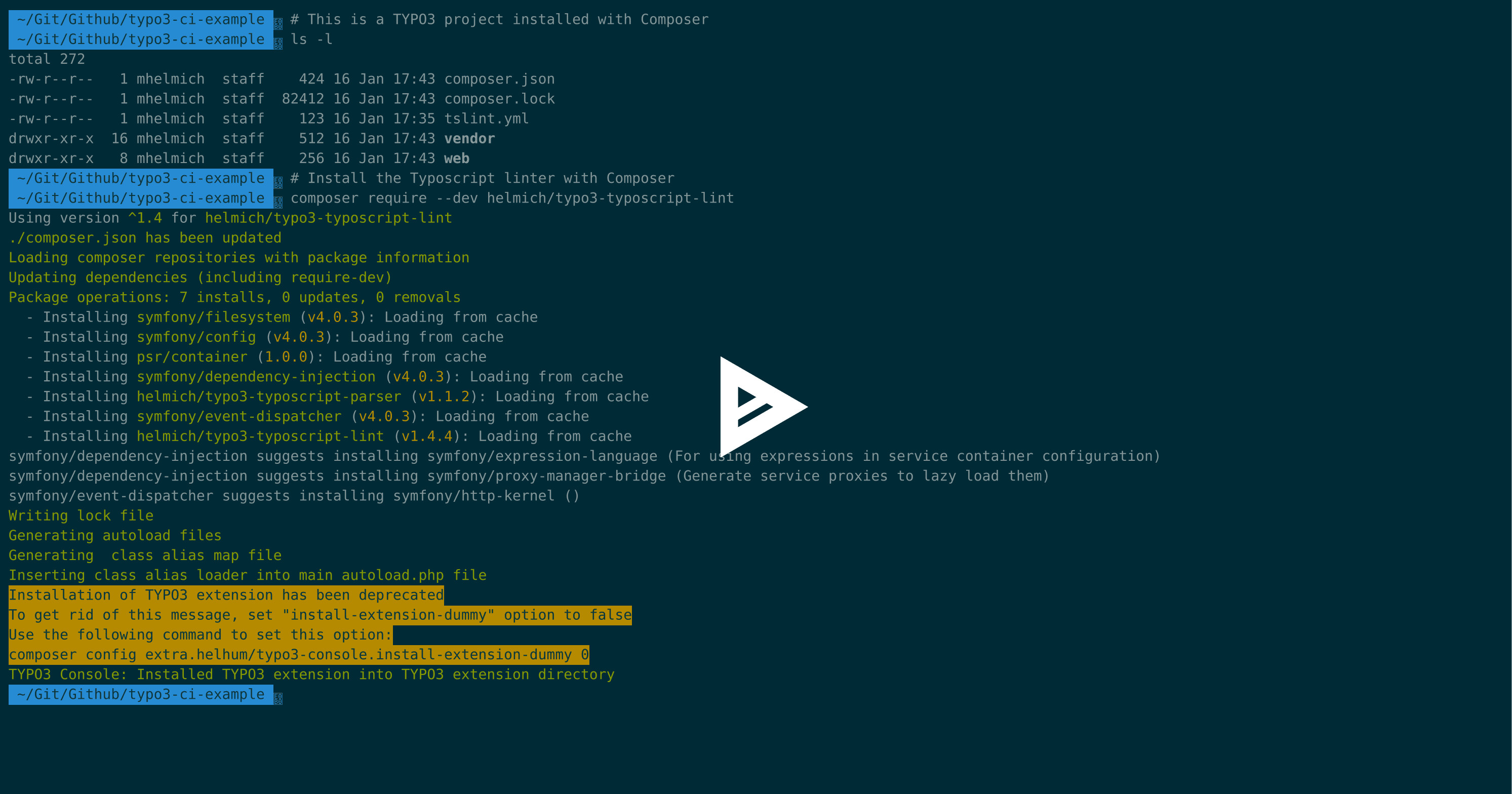 Certain aspects of code validation are organized into so-called "sniffs" (I borrowed the term from PHP's CodeSniffer project). Currently, there are sniffs for checking the following common mistakes or code-smells in TypoScript:

The indentation level should be increased with each nested statement. In the configuration file, you can define whether you prefer tabs or spaces for indentation.

Code that was commented out just clutters your source code and obstructs readability. Remove it, that's what you have version control for (you do use version control, do you?).

Check that no superflous whitespace float around your operators.

If the same value is assigned to different objects, it might be useful to extract this into a TypoScript constant.

By default, any value with a length of 8 characters or more will trigger a warning if it is repeated more than once. You can configure this threshold by setting the valueLengthThreshold parameter for the RepeatingRValueSniff in your configuration file.

It is also possible to whitelist certain values that are allowed to repeat. You can set those in the allowedRightValues parameter in your configuration file.

Assigning a value to the same object multiple times. Works across nested statements, too.

The sniff is however smart enough to detect conditional overwrites. So the following code will not raise a warning:

This sniff checks if nesting assignments are used in a consistent manner. Consider the following example:

In this case, the two nested statements might very well be merged into one statement.

In this case, both statements could be nested in each other.

Note: Previous versions of this tool used the filename tslint.yml for their configuration files. This conflicted with the same-named tool for linting TypeScript, and is thus considered deprecated (although the old file names are still supported).