Automate the distribution of patches to various Git repositories

A tool to automate the distribution of patches to various Git repositories. 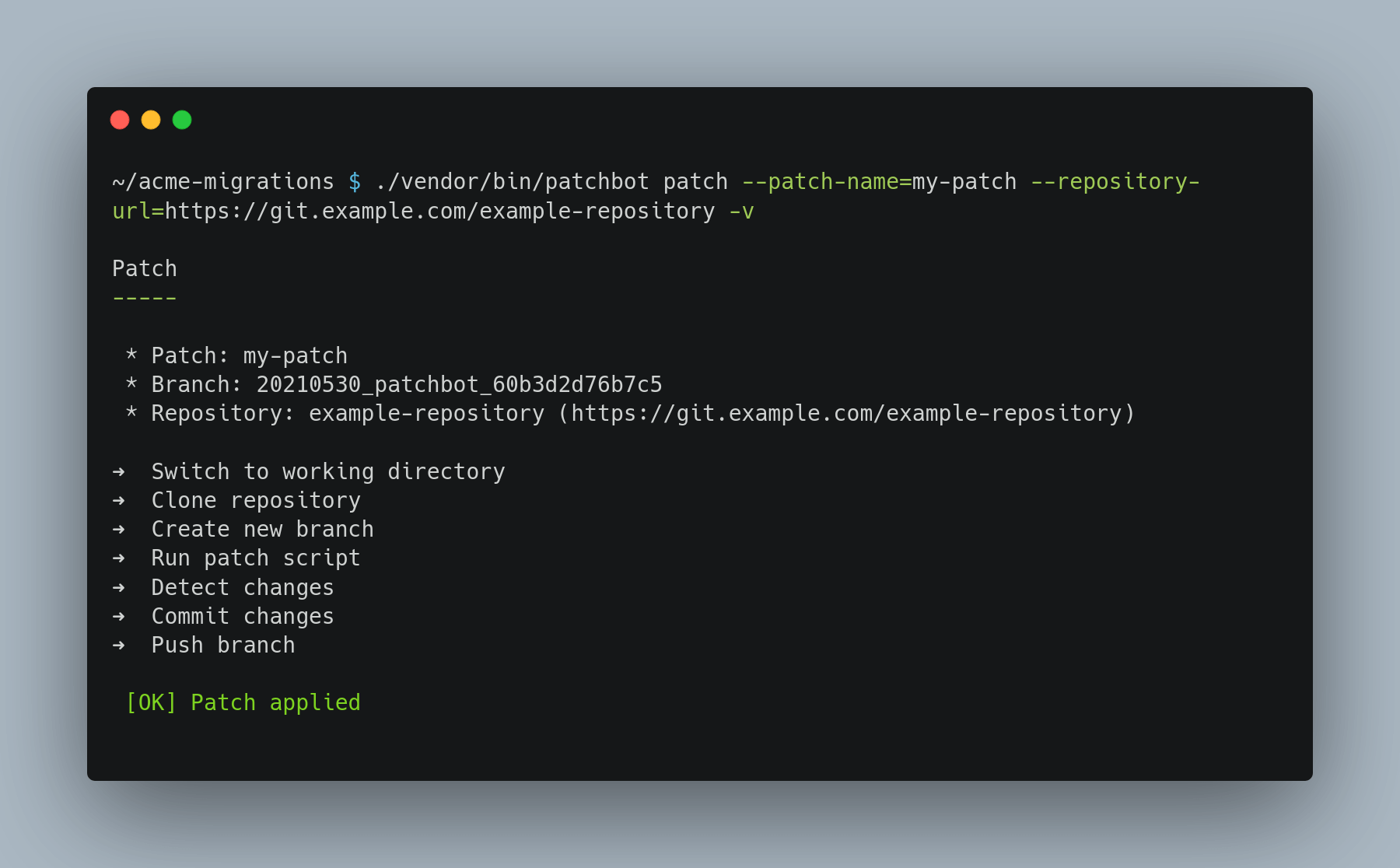 This project provides a tool to distribute changes to a several Git repositories with as little manual work as possible.

The need for this came up when I had to apply the same manual changes to many of my repositories:

The idea is to do the changes only once and move the repetitions to a tool. Saving time, preventing careless mistakes and shun monotonous work.

📝 Take a look at this blog post with real world examples and how Patchbot helps to reduce technical debt across your own Git repositories.

The package follows the KISS principle.

💡 Use the skeleton package to create an example project right away.

🔑 The user running Patchbot needs to have access to the target repository.

Make sure that the user running Patchbot is allowed to clone and push to all target repositories.

Patchbot allows all protocols for connections to remotes which are supported by Git natively: FILE, HTTP/HTTPS, SSH

The recommended protocol is SSH.

Git by default does not store any credentials. So every connection to a repository by HTTPS will prompt for a username and password.

To avoid these password prompts when using HTTPS URIs with Patchbot you have two options:

Patchbot patches a given Git repository.

This means it will clone the repository, create a feature branch, run a given PHP patch script, commit the changes with a given commit message and push the branch to the remote.

The directory patches contains a collection of all your “patch directories“.

This way a migration script may be created once and applied in a row to many repositories or ad hoc every time the need arises.

Pass the name of the patch directory as patch-name and the Git repository as repository-url to the patchbot script.

Example command applying the patch script in directory template to the repository https://git.example.com/repository:

Example command applying the patch script in directory template to the repository ssh://git@git.example.com/repository.git:

To create the feature branch based on the branch development instead of the default main branch use this command:

It is recommended to let a CI run all tests. That's why Patchbot creates a feature branch by default. If you want to review complex changes manually before the commit is created, then use the halt-before-commit option:

To be more verbose add -v to each command. Add -vvv for debugging. This will show all steps and commands applied by Patchbot. The flag --no-ansi will remove output formation.

Example command to create a directory named add-changelog-file and all files needed for the patch (the name is slugified automatically):

Or copy the example folder template manually instead and rename it as desired.

Now replace the patch code in patch.php and the commit message in commit-message.txt.

🛡 ️Patchbot runs the patch script isolated, as a consequence it is possible to run the script without Patchbot.

💡 Tip: Switch to an existing projekt repository, run php <path to patch directory>/patch.php and develop the patch incrementally. When development is finished, then commit it and use Patchbot to distribute the patch to all other repositories.

The patch code will be executed in the root directory scope of the target repository, keep this in mind for file searches.

However, since a motivation for this tool was to reuse migration scripts, you could share general-purpose scripts with others though.

One possible way is to create a GitHub Gist for a single patch.

🔎 Search for Gists with Patchbot tags.

Copy & paste all files manually to import an existing patch from another source.

If the source is a Git repository then a Git clone command is sufficient.

To apply a patch to 1 or 20 repositories you may run the Patchbot script repeatedly with different URLs. To do this with 300 repos you may want to use the batch processing mode instead.

This mode will trigger the patch or merge command for a list of repositories. The list is expected as CSV file named repositories.csv.

repositories.csv - Example file content, with repository & branch to use

The patch subcommand allows all options of the patch command, except for repository-url and source-branch. Both are provided by the repositories.csv file instead.

The following command will apply the patch script update-changelog to all repository URLs in the first column of the repositories.csv file and create the feature branch based on the name in the second column.

The merge subcommand also allows all options of the merge command, except for repository-url and target. Both are provided by the repositories.csv file instead.

The next command will merge the feature branch feature-add-phpcs-rules into the branch name in the second column of the repositories.csv file and in all repositories of the first column:

When the branch names used in the patch and merge subcommand differ, or when you need to merge the feature branch into several stage branches you may provide a file with all branches and pass the name of the designated branch column as option branch-column.

The GNU General Public License can be found at http://www.gnu.org/copyleft/gpl.html.

This script is Open Source, so please use, share, patch, extend or fork it.

Please send some feedback and share how this package has proven useful to you or how you may help to improve it.