Modular and extensible automation scripts in php. Based on Symfony\Console component. This package was created to allow php programmers to create robust setup scripts for their projects that can be ran almost anywhere given the wide spread of php installations. 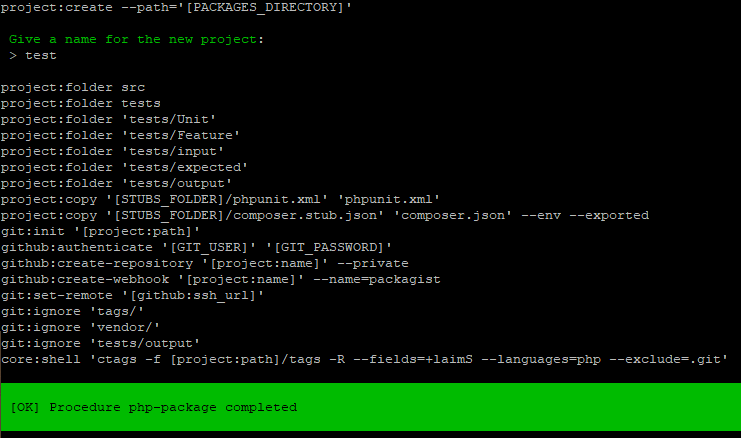 As the number of tools you use for your projects increases, so does the time required to set everything up. These tasks include but are not limited to:

Even though more simplistic scripts can be used in even wider variety of environments, some of these tasks quickly become messy and lead to project specific installation scripts and duplicated code. Because of these reasons, it is ideal to break down the complex setup scripts into more modular, reusable components.

Commands are called by their command signature that always starts with the name of the plugin that command belongs to as command namespace. For example, to call a "create" command defined in the "project" plugin, you would enter the following command:

Procedures are series of commands defined in json format. They can be executed same way as commands and allow you to pass results and information from executed commands to other commands that are part of the procedure.

This project uses the dotenv library to easily load user defined options. Create a file called .env in the project root directory or create one from the .env.example file:

Jinitialize plugins can request default options for your convenience. A project plugin could for example request you to define DEFAULT_PROJECTS_FOLDER to suggest a reasonable default path when creating new projects. This way you don't have to type the full path each time.

Any packages that you require in your jinitialize project that define the "jinitialize-plugin" section in their extra section will be autopublished to bootstrap/cache/plugins.php. Installing a new plugin for your project is as simple as requiring it:

Creating your own plugins

Check out the jinitialize-plugin boilerplate project for more information on how to create your own plugin packages.