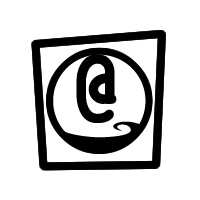 Taste a.k.a. Taste of Liquor

This PHP library is a complete environment for testing, debugging and benchmarking a PHP app. It provides a GUI and is based on ajax to perform operations and display results. Unlike many others PHP unit test (like PHP-Unit for instance), Taste of Liquor is not going from code to test logic, but from test logic applied to callables. Therefore, you can easily achieve testing and benchmarking many datasets on many callables.

You must remember that this kind of tool is for development only ! It obviously creates backdoors to access informations about your code. Never deploy it on your production server if you don't know what you are doing.

This tool is still in dev status and will have some bugs that can be reported here. If you want to contribute, just fork the project and submit a pull request. A todo list is maintained. 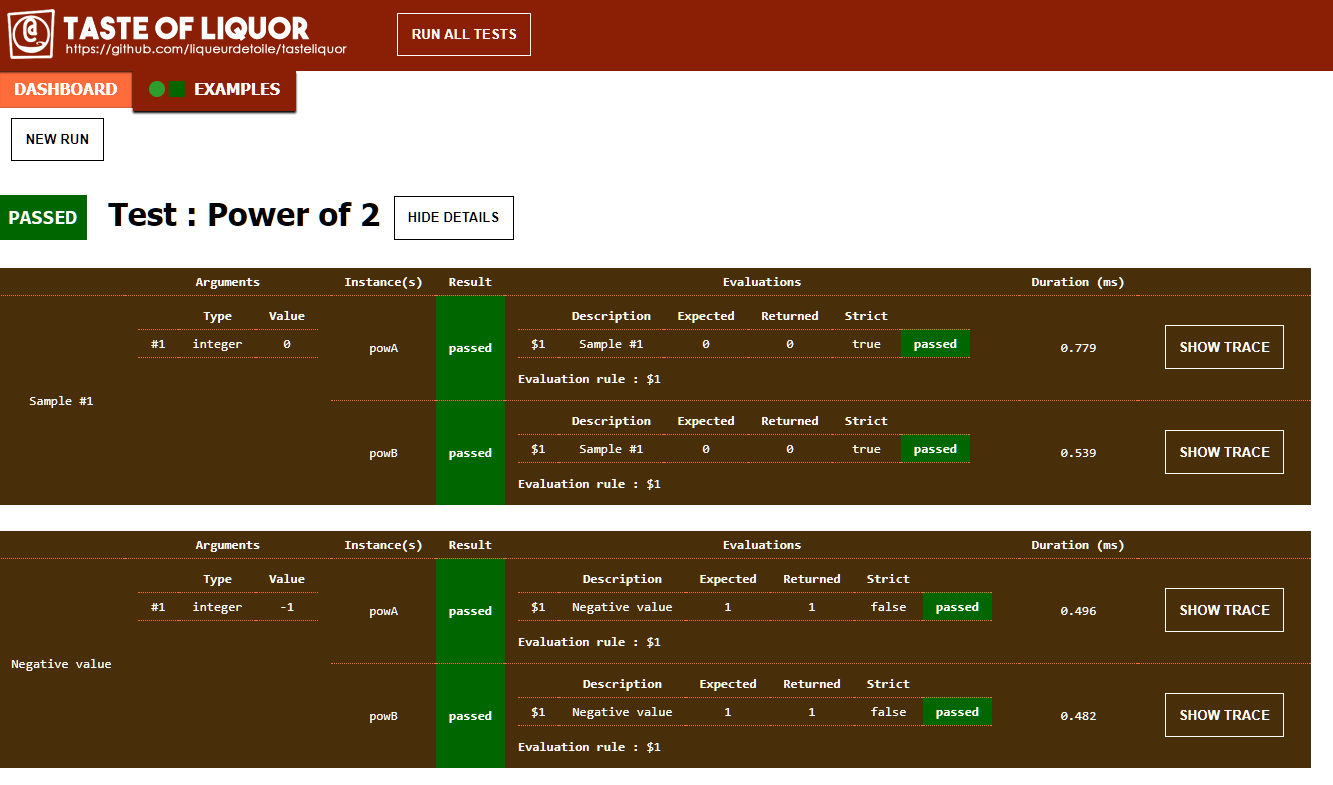 As this time, there is some little extra setup to make it work :

Taste of Liquor will automatically create assets and cache folder at first runtime to hold its own ressources and store results.

Hint : You can browse the /tastes folder of this repo for examples.

Taste of Liquor is based on runs. For automation to work, each run needs to match a file and each file must contain only a single class that extends the core class Run. File name must be the same than class name.

A sample is the unitary test, basically a set of data inputs, operations and conditions that returns a boolean value if passed or failed. If all samples are passing, test is passing.

Each sample can be run on multiple testing instances (function/class to be tested). Instances can be added or removed at runtime.

Okay, let's throw away theory by now. For a complete example, you can refer to examples.php demo run file.

Create myfirsttestrun.php in your tests folder :

Run's name will automatically be set to MyFirstTestRun.

There is some special method callbacks for a run :

Each callback is provided with the current Testing Instance which can be updated by passing it by reference in your callback :

Great, you're done for setting a run with actually no tests 😊

Each test matches a method of your run class, for instance :

Test name will be default to function name unless you set a more human-friendly name with the name method wich only accepts a string.

Okay, test is set up but, wait, what do we want to test exactly ?

Testing instances are code logics that can be launched by Taste of Liquor (functions or class) and check if they behave as expected. The can be anything :

Taste of Liquor is using an underlying call to call_user_func_array to launch each sample test. Therefore, the $callable declaration must follow usual conventions :

A sample is ran against each available instances at its runtime.

Hint : Taste of Liquor can perform any logic on instance at evaluation time, therefore there's no need to set up unwanted returned values.

Multiple instances are very useful to tests different logic on the same dataset.

Just add your new testing instance with the same name than the one you want to replace.

Testing instances can also be removed on-the-fly with the removeInstance method :

A Testing instance is removed given its name :

Samples are the heart of the testing and benchmarking logic. They are responsible to answer to a simple question : failed or passed.

You simply need to call the method sample.

At the simpliest approach, you can do such things :

It simply means to provide 1 as first parameter, 2 as second parameter and to expect that result would be 3 (our testing instance returns $a + $b).

The call to method evaluate tells Taste of Liquor that the test is over and the result of the test should be evaluated.

We said before that all samples must passed for whole test to pass. It is the default behaviour but you can be a more tricky by providing a rule.

The main use of this rule is to set aside some samples that you want to have but not take in account for test result.

Behind each test and each sample, there is an instance of Taste\Result that multiplies testing possibility. You can instantiate as many Result as you want but do not forget to feed back the sample result 😉

As we said, you can perform any testing logic in your sample with the Result object.

The evaluate method works exactly the same way than the Test one excepted that it will consider the result of the expectations. An expectation is set with the expected method :

Let's say that we want to test this class :

With the second approach, the result of the evaluations inside the sample will be available in your [test report](#Test-report-details and you'll won't be lost in finding what have failed if the sample evaluation requires many expectations.

Taste of Liquor is not available on CLI (maybe in the future) but provides and ajax-based GUI. Simply acces the GUI through your dev server (LAMP/WAMP or online) by heading towards the main folder (alternatively, you can set an alias or a virtual host for instance that points directly to this folder)

The header of the GUI contains a wonderful log... hum, brumm, global buttons to run tests, benchmarks or all at once. For each run that is detected, a specific tab is created. The first rounded color dot means its status (surprisingly blue = waiting, orange = pending, green = done, red = error) and the second squared dot means its result (grey = not run, green = passed, red = failed) Clicking on tab will lead you to its report. 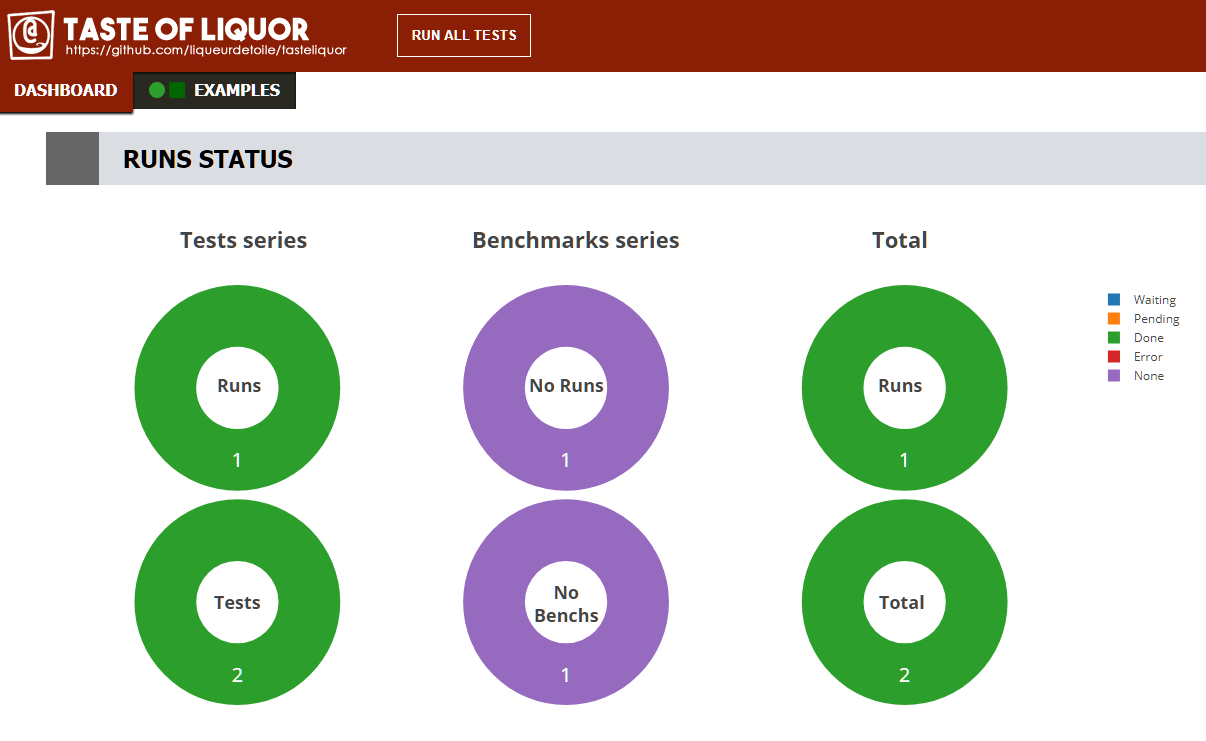 The dashboard presents the status of the tests and benchmarks detected by Taste of Liquor. It will be imporoved in next version. 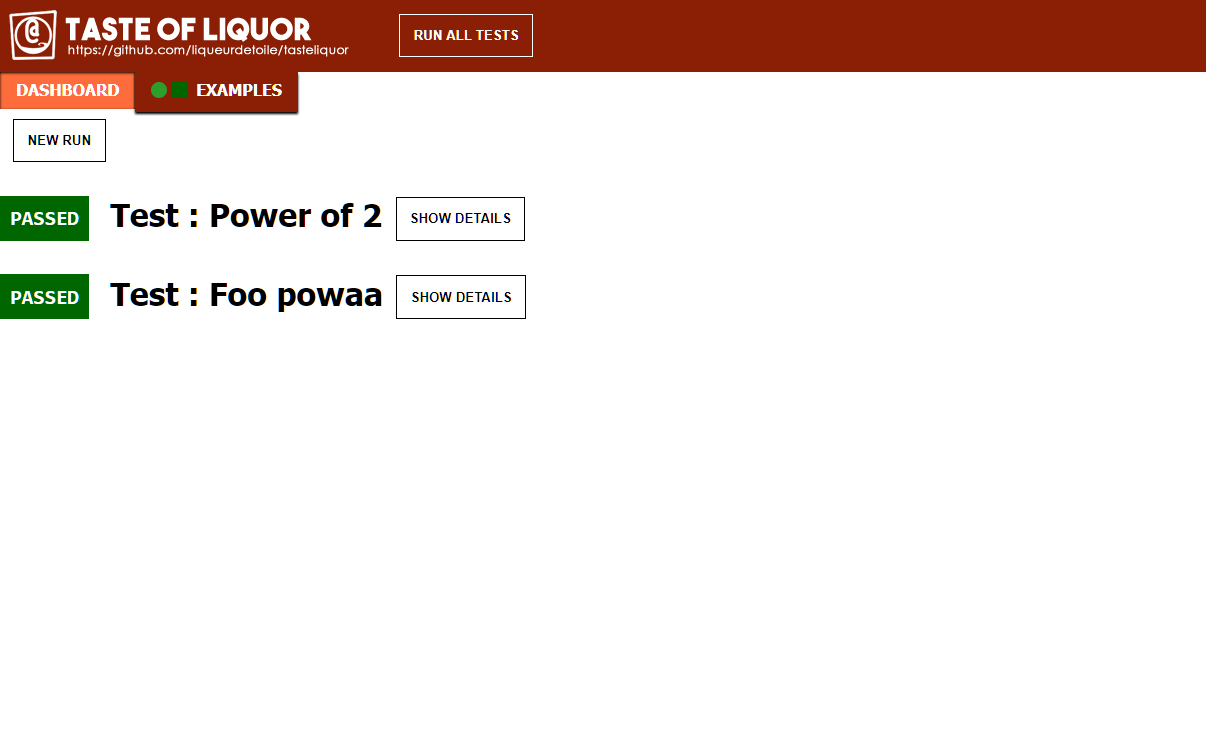 The report screen displays all run results. Passed results are hidden by default but can be toggled with the show details button. You can use the run test to start (or start again) only this run.

This view give access to each sample details inside a test :

You can also access the full trace with ad hoc button

There is many things to do still but taste of Liquor is already fully functionnal for testing purposes.