A clean, effective and responsive interface for Zend OPcache, with real(ish)-time monitoring, filtering and the ability to invalidate files

A clean and responsive interface for Zend OPcache information, showing statistics, settings and cached files, and providing a real-time update for the information.

This interface uses ReactJS and Axios and is for modern browsers and requires a minimum of PHP 7.1.

If you're able and would like to sponsor this work in some way, then that would be super awesome ❤️, and you can do so through the GitHub Sponsorship page.

Alternatively, if you'd just like to give me a shout-out on Twitter to say you use it, that'd be awesome, too! (Any one else miss postcardware?)

There are two ways to getting started using this gui:

The easiest way to start using the opcache-gui is to clone this repo, or simply copy/paste/download the index.php file to a location which your web server can load. Then point your browser to that location, such as https://www.example.com/opcache/index.php.

You can include the files with Composer by running the command composer require amnuts/opcache-gui.

Once in your vendor directory, there are numerous ways in which you can use the interface. For example, if you're using a framework such as Symfony or Laravel, you could load opcache-gui into a Controller. Your requirements of setting it up within your framework of choice will vary, so it's not really possible to detail how to do that within this readme... but I have faith in your ability to figure it out!

The namespace used for the class is Amnuts\Opcache, so once the dependency is in your autoload.php you can use the \Amnuts\Opcache\Service class. For example, you could do something like:

Then you can create whatever view you want with which to show the opcache details. Although there is a pretty neat React-based interface available for you in this repo.

Alternatively, include vendor/amnuts/opcache-gui/index.php directly and this'll give you the same result as just copying/pasting the index.php somewhere.

You could even simply create a symlink to the index.php that's in the vendor directory:

Basically, there are plenty of ways to get the interface up and running - pick whichever suits your needs.

The default configuration for the interface looks like this:

For example, the following would change only the allow_reset and refresh_time values but keep everything else as the default:

Or this example to give the tabs a slightly more "piratey" feel:

The overview will show you all the core information. From here you'll be able to see what host and platform you're running on, what version of OPcache you're using, when it was last reset, the functions and directives available (with links to the php.net manual), and all the statistics associated with the OPcache (number of hits, memory used, free and wasted memory, and more).

All the files currently in the cache are listed here with their associated statistics.

If you do not want to show the file list at all then you can use the allow_filelist configuration option; setting it to false will suppress the file list altogether.

If you want to adjust the pagination length you can do so with the per_page configuration option. 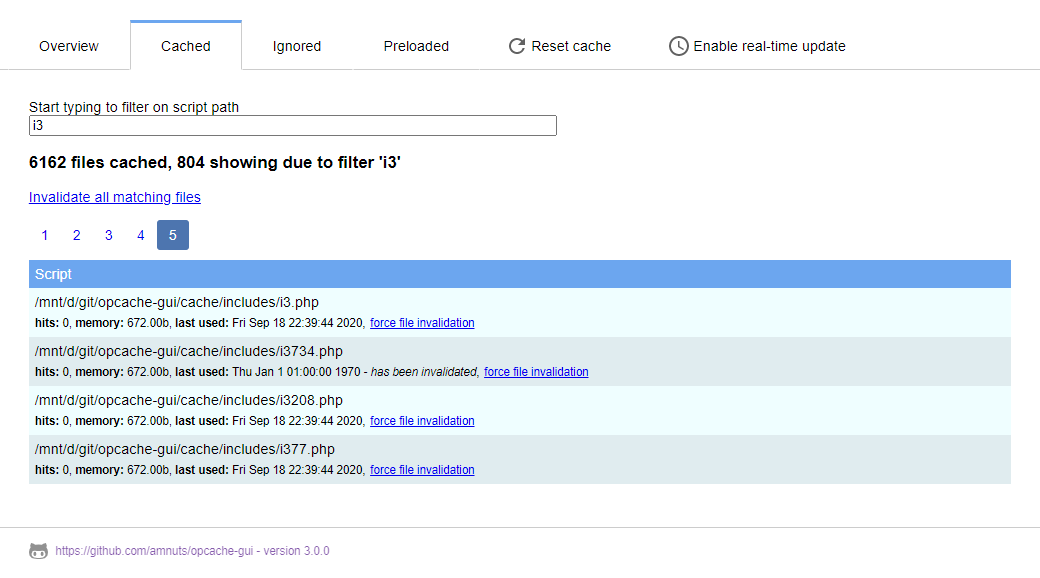 If you have set up a list of files which you don't want cache by supplying an opcache.blacklist_filename value, then the list of files will be listed within this tab.

PHP 7.4 introduced the ability to pre-load a set of files on server start by way of the opcache.preload setting in your php.ini file. If you have set that up then the list of files specifically pre-loaded will be listed within this tab.

As with the ignored file, if you have not supplied the ini setting, or the allow_filelist configuration option is false, then this tab will not be displayed.

You can reset the whole cache as well as force individual files, or groups of files, to become invalidated so that they will be cached again.

Resetting can be disabled with the use of the configuration options allow_reset and allow_invalidate.

The interface can poll every so often to get a fresh look at the opcache. You can change how often this happens with the configuration option refresh_time, which is in seconds.

When the real-time updates are active, the interface will automatically update all the values as needed.

Also, if you choose to invalidate any files or reset the cache it will do this without reloading the page, so the search term you've entered, or the page to which you've navigated do not get reset. If the real-time update is not on then the page will reload on any invalidation usage.

The interface has been split up to allow you to easily change the colours of the gui, the language shown, or even the core components, should you wish.

To run the build process, run the command php ./build/build.php from the repo root (you will need nodejs and npm already installed). Once running, you should see the output something like:

The build script will only need to install the node_modules once, so on subsequent builds it should be a fair bit quicker!

The build process will create a compiled css file at build/interface.css and the javascript of the interface will be in build/interface.js. You could probably use both of these within your own frameworks and templating systems, should you wish.

The CSS for the interface is in the build/_frontend/interface.scss file. Make changes there if you want to change the colours or formatting.

If you make any changes to the scss file then you'll need to run the build script in order to see the changes.

If you want to change the interface itself, update the build/_frontend/interface.jsx file - it's basically a set of ReactJS components. This is where you can change the widget layout, how the file list works, pagination, etc.

Run the build script again should you make changes here.

The wrapper PHP template used in the build process, and that acts to pass various bits of data to the ReactJS side of things, is located at build/template.phps. If you wanted to update the version of ReactJS used, or how the wrapper html is structured (such as wanting to pass additional things to the ReactJS side of things), then this would be the file you'd want to update.

The template includes a few remote js files. If you want to make those local (for example, you have CSP policies in place and the remote urls are not whitelisted), then you can use the -j or --local-js flags when building, such as php ./build/build.php -j. This will fetch the remote script files and put them in the root of the repo, adjusting the links in the built index.php file to point to the local copies. If you want to build it again with remote files, run the command again without the flag.

There's an old saying that goes, "If you know more than one language you're multilingual, if you don't you're British." Not only is that a damning indictment of the British mentality towards other languages, but also goes to explain why the UI has only so far been in English - because I am, for all my sins, British.

However, it is now possible to build the interface with a different language. Currently, thanks to contributor, French is also support. If anyone else wants to contribute additional language packs, please submit a PR!

If you want to create a language file then build/_languages/example.json contains all you need. It's a simple json structure with the key being the English version which matches what's in the UI, and the value is what you're converting it to - which in the example file is just blank. If a value is empty or the index doesn't exist for a translation, then it'll just use the English version. This gives you the ability to replace some or all of the interface strings as you see fit.

So to get started with a new language, copy the example.json to the language you want that doesn't already exist - for example, pt-br.json. Then fill in the translations into the values. Once done, rebuild with php ./build/build.php -l pt-br.

Version 3.4.0
This version adds a little more info about the files in the cache, and allows a bit more configuration though the config and build script.

If you want to enable JIT you have to put in a value for the opcache.jit_buffer_size ini setting, else it's disabled by default.

If you're not using PHP 8, the interface will compensate and not show the additional JIT information.

Version 3.2.0
Updated ReactJS to latest and used minified versions and made slight improvement to sort option when no pagination is present.

Version 3.1.0
Added the ability to sort the cached file list in a variety of ways.

Version 3.0.1
A minor update that will use http or https to get the javascript libraries, depending on what you're using.

Version 3.0.0
Although the interface looks mostly the same, it's had a complete re-write under the hood! Some of the more notable changes are:

Version 2.5.3
CSS class names have been added and style rules updated to use them.

Version 2.5.2
Hotfix for the optimisation_level values that was put out in v2.5.1.

Version 2.5.1
A couple bug fixes and improvement on the optimisation level details.

Version 2.4.0
Adds cookie store for the real-time state allowing real-time to be activated on load. Cookie name and TTL length can be adjusted in the config

Version 2.2.2
Brings in optimisations for the file listing when filtering

Version 2.2.1
Has the gauges now updating with the real-time pulse and a couple rounding issues fixed

Version 2.2.0
Provides the ability to turn on/off the file list (default is on)

Version 2.1.0
Now provides a much easier way to configure some options, be it the poll time, toggling the ability to reset the cache, real-time updates, etc. It also allows you to show the big values (memory usage and hit rate) as gauge graphs instead of big numbers.

Version 2.0.0
Introduces the use of React.js provides the ability to seamlessly update more of the information in real-time (well, every five seconds by default) - so now the files as well as the overview get refreshed. There is an updated look, removing the gradients and going for a flatter feel. And the code in general has had an overhaul.

Releases of the GUI are available at:

A number of people have questioned whether the opcache-gui is working on their instance of PHP-FPM, as the files shown don't appear to be everything that's cached, and that's different to what Apache might show.

Essentially, that's expected behaviour. And thanks to a great comment from contributor Michalng, this explanation should cover the difference:

To be able to monitor and manage the OPcache for all web applications, all need to use the same FastCGI, i.e. PHP-FPM instance.

In case of Apache, one then often needs to actively configure it to not use it's internal mod_php but send PHP handler requests to the shared PHP-FPM server via mod_proxy_fcgi, which also requires using the event MPM. That is generally seen as the preferred setup nowadays, especially for high traffic websites. This is because every single incoming request with MPM prefork + mod_php creates an own child process taking additional time and memory, while with event MPM and dedicated PHP-FPM server a (usually) already waiting handler thread is used on Apache and on PHP end, consuming nearly no additional memory or time for process spawning.

Making is compatible with PHP 7.0

The script requires PHP 7.1 or above. I'm not tempted to downgrade the code to make it compatible with version 7.0, and hopefully most people would have upgraded by now. But I really do appreciate that sometimes people just don't have the ability to change the version of PHP they use because it's out of their control. So if you're one of the unlucky ones, you can make the following changes to index.php (or Service.php and run the build script). For the lines:

It'll just be a case of removing the ? from each of the params.